lost ark
Lost Ark is fun to play and an exciting game with tons of currencies, just like any other MMORPG. You can purchase and get these currencies in tons of unique ways. Every money has a different and unique privilege in different lost Ark classes. This article will analyze and discuss Lost Ark classes of this highly anticipated action role-playing game, their functioning, and how to decide which class is the best choice for you! 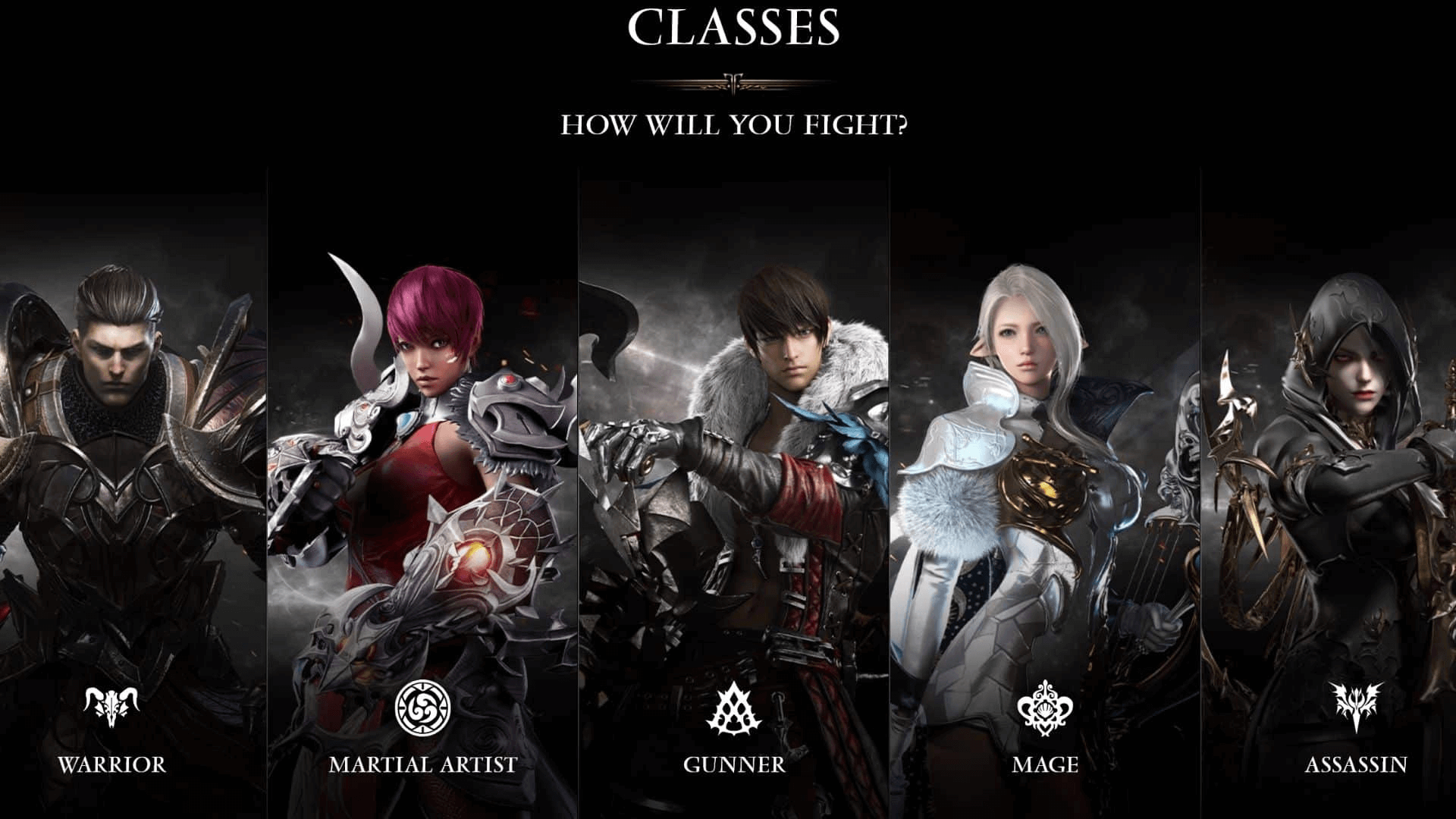 What are Lost Ark Classes?

Lost Ark offers diversity to its player. It consists of five distinctive classes with unique subclasses possessing specialized skills and authority for customizing your playstyle. The Lost Ark classes system creates an outstanding balance by offering a broad range of features and powers to fulfill the player's demands.
The advancement of the classes into subclasses enables the player to choose while focusing on their skills and capabilities more specifically. Furthermore, before starting the game, you should keep a few things in mind, including in-game currency that helps you purchase valuable things, including the Song of Resonance. If you are looking for the way to buy Lost Ark gold, then you should visit gaming marketplaces like PVPBank to find the best deals.
The classes are as follows:
Warrior: Berserker, Paladin, Gun lancer
Martial Artist: Striker, War dancer, Scrapper, Soul fist
Gunner: Gunslinger, Artillerist, Deadeye, Sharpshooter
Mage: Bard, Sorceress
A player can select any class or subclasses according to his preferred playstyle. The developers will add more categories after launch, not mentioned here.

How to Decide which Lost Ark Class is Right for You?

Out of all the lost ark classes, every class has its unique style, look, and role, with its perspective having a different story. Fighting with enemies, wielding high-tech weapons, or delivering significant mid-to-long ranged attacks all can add flavors to your powerplay. But it is essential to choose the most suitable and appropriate class because you can't change your style in Lost Ark later.
It's a one-time decision; Once you select a category, you are locked into that class for that character. The subclass can't also be altered once you have chosen it. So, all players should be wise while making any choice.
How to get these coins: These coins are awarded for all activities that are complete in your ship on the Ocean and from the sea dungeon.

If you are one of those players searching for the best Class in Lost Ark, you should keep in mind that there aren't many classes to choose from, but each class comprises two or more subclasses with varied playstyle abilities and powers. Meanwhile, some classes are gender-locked and can't be easy to unlock. Selecting the perfect class for you could be a difficult process; therefore, we jump in to help you with our Lost Ark Classes Guide.
Warrior (Melee)
In Lost Ark, the Warriors are precisely what you imagine to be. They are powerful killer machines and fully loaded with unique abilities. It has three subclasses and their names are the following:
Berserker (Male) – instead of using the sword as the primary weapon, Berserker prefers quick attack animations and defense.
Paladin (Male) – It comes with the ability to shield and buff himself and party members.
Gunlancer (Male) – He can easily absorb damage while defending the party members.

Martial Artist (Melee)
Martial Artist comes with different fist weapons that they use to defeat enemies speedily. This Character Class has four possible subclasses, and their names are given below:
Wardancer (Female) – The Wardancer can perform fast attacks and aerial combos to defeat enemies. A few skills eliminate enemies by through them higher into the air.
Striker (Male) – Like Wardancer, Striker can perform fast attacks; however, launching themselves up to bring the pain to the foes from above is its extraordinary power.
Scrapper (Female) – Although the Playstyle of Scrapper is similar to Striker, it relies on two resources that you must maintain to ensure when using the subclass.
Soulfist (Female) – She uses a mix of ranged and melee attacks that make it different from other subclasses of Material Artist. 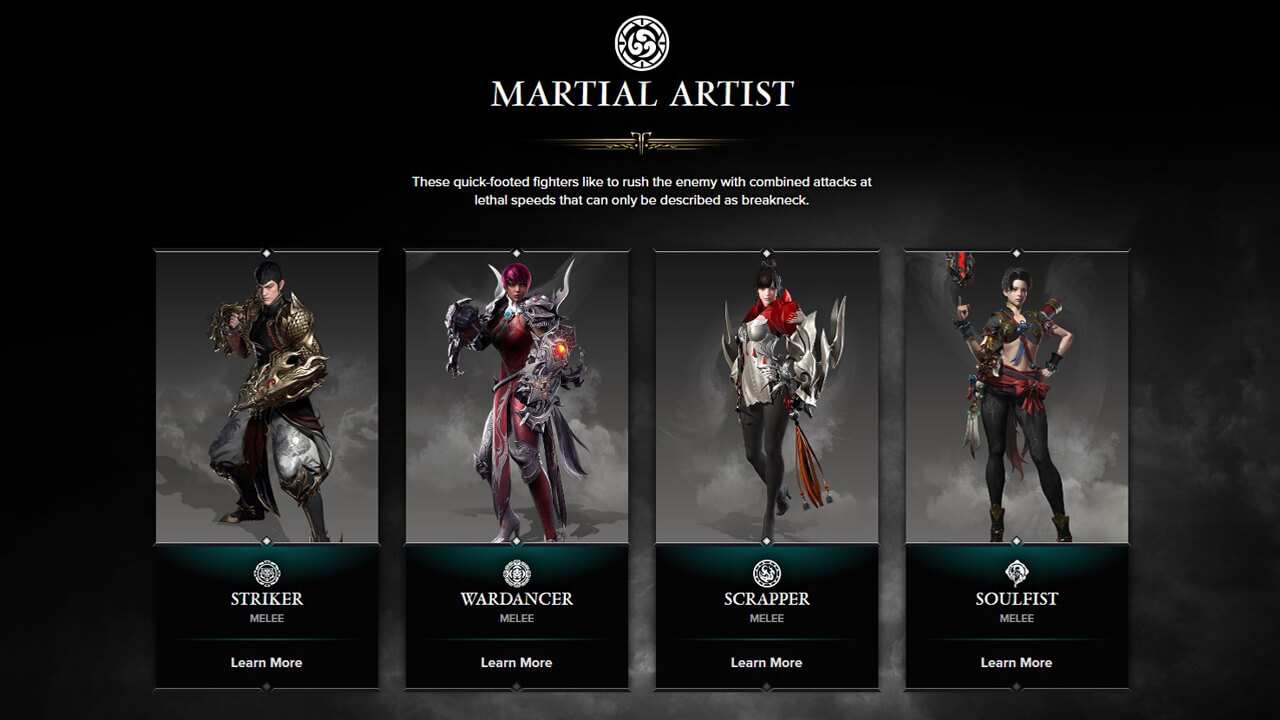 Gunner (Ranked)
This character class is loaded with guns and bows to defeat enemies at a particular range. There are four different subclasses available, and their names are the following:
Gunslinger (Female)
If you love to play with Mobile Class, then Gunslinger is designed for you as it can switch weapons according to the battle taste and situation speedily. Three different types of guns have been introduced, offering Utility, Damage, and Degrees.
Artillerist (Male)
Although it's the least subclass, it is loaded with a massive gun to deal considerable damage to waves of enemies.
Deadeye (Male)
The playstyle of Deadeye matches with Gunslinger; however, he relies on switching weapons during the combat to get different abilities.
Sharpshooter (Male)
As the name implies, the subclass can damage from a distance. A few of its skills offer stealth effect, and you can defeat enemies without letting them know from a distance. 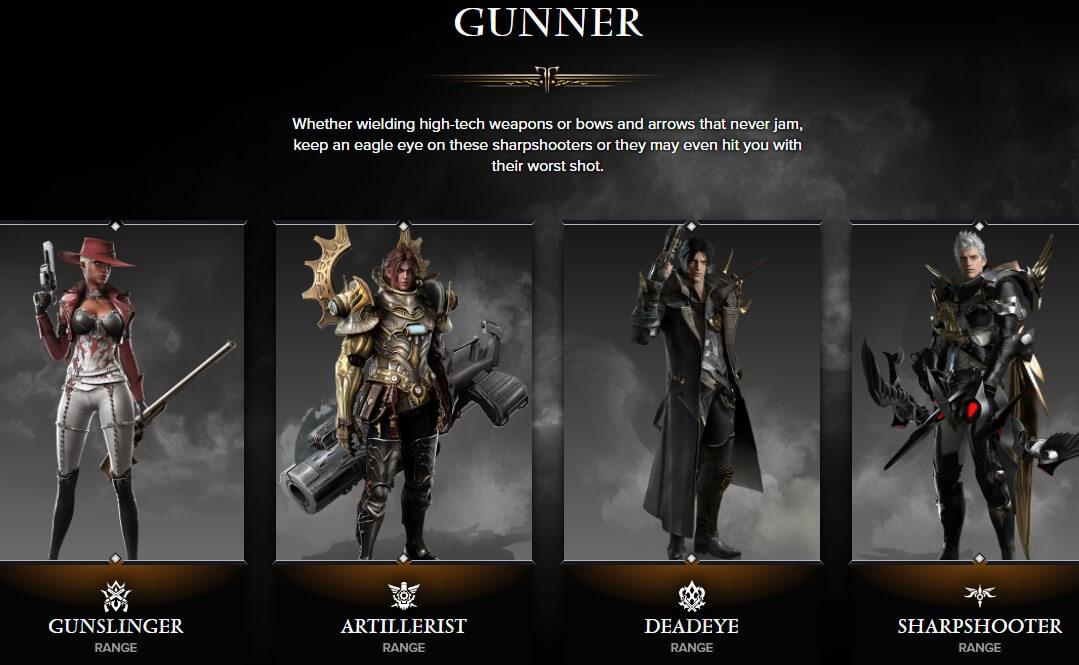 Mage (Ranged)
Mage has two subclasses, and they usually use magic spells to drive out enemies from the battlefield. The available subclasses are the following:
Sorceress (Female)
She possesses a classic Mage Playstyle and comes with three different elements that can be used to deal with AoE Damage.
Bard (Female)
Bark lacks mobility and defense; however, it can be redeemed using the healings, shields, and buffs. Saying the subclass isn't designed to deal the damage will be wrong, but it has low attack power.

Assassin (Melee)
There are two subclasses of Assassin, and both are Melee Fighters. They use dark forces to transform or kill enemies using Quick Attacks.
Deadthblade (Female)
Deathblade uses different swords to perform quick combo attacks and take down enemies speedily, unlike any other subclasses. Thanks to its high mobility, getting around the battlefield and performing back attacks is possible.
Shadowhunter (Female)
Shadowhunter is loaded with two glaives that can kill enemies; meanwhile, the said ability can turn the character into powerful demonic forms. 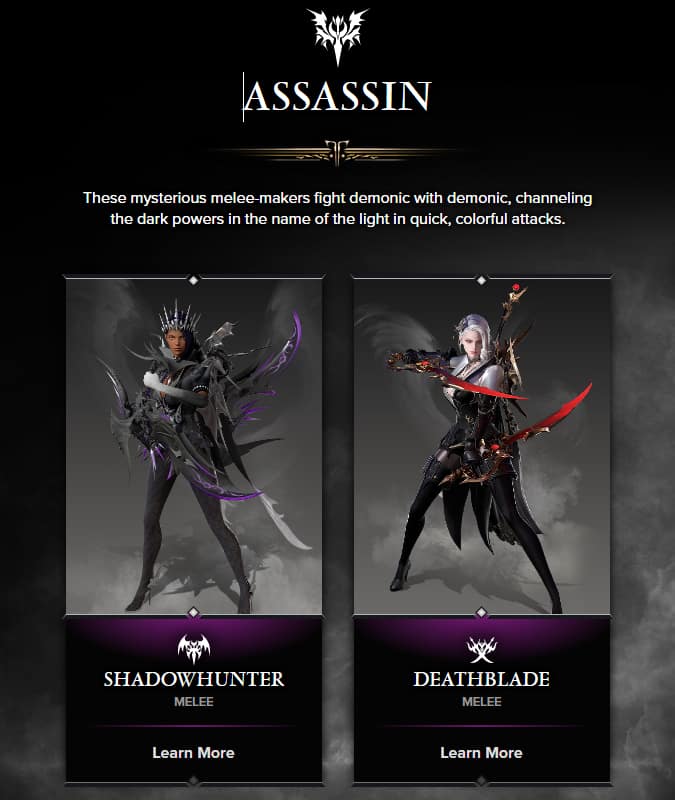 Conclusion
Lost Ark classes and their subclasses are the best game to play. There are tons of coins and other currencies available in the game to buy other stuff like potions, weapons, vehicles, etc. These coins can be purchased from the cash shop and exchanged with other currencies. You can also get these coins by providing different services, fighting quests, and raids, but this whole procedure is quite lengthy and time-consuming. So, it's a better option for the players to buy the coins directly from the store.