FFXIV
Do you love playing Massively Multiplayer Online video games? If so, FFXIV is designed to take your gaming skills to the next level. It offers a beautiful blend of MMO and RPG genres, along with hack-and-slash and third-person action elements. In the game, the player starts his journey using the customized adventurer character as there are five playable races available, and each race has almost two tribes. This FFXIV Masked Carnivale Guide will help you understand how to complete stages 1-31. If you are new to Final Fantasy XIV, knowing the importance of in-game currency is mandatory as it may help you progress faster and level up your heroes. If you can’t afford in-game currency from in-game stores, you can buy FFXIV Gil from third-party marketplaces.

What is FFXIV Masked Carnivale?

FFXIV Masked Carnivale is a series of events designed for Blue Mages; however, they offer a massive range of opposing characters to test your skills, magic spells and earn lots of rewards to proceed through the game. In short, the events are designed to help you learn the limit of your Blue Magic in this challenge. Furthermore, the Masked Carnivale consists of 31 stages, and the name of the stages are the following:
1.All's Well That Starts Well
2.Much Ado About Pudding
3.Waiting for Golem
4.Gentlemen Prefer Swords
5.The Threepenny Turtles
6.Eye Society
7.A Chorus Slime
8.The Bomb-edy of Errors
9.To Kill a Mockingslime
10.A Little Knight Music
11.Some Like It Excruciatingly Hot
12.The Plant-om of the Opera
13.Beauty and a Beast
14.Blobs in the Woods
15.The Me Nobody Nodes
16.Sunset Bull-evard
17.The Sword of Music
18.Midsummer Night's Explosion
19.On a Clear Day, You Can Smell Forever
20.Miss Typhon
21.Chimera on a Hot Tin Roof
22.Here Comes the Boom
23.Behemoths and Broomsticks
24.Amazing Technicolor Pit Fiends
25.Arena Magus
26.Dirty Rotten Azulmagia
27.Papa Mia
28.Lock up Your Snorters
29.Dangerous When Dead
30.Red, Fraught, and Blue
31.The Catch of the Siegfried
32.Anything Gogo's
The masked carnival of FFXIV is located in the Ul ’dah place, and you can unlock it after completing level 50 of the job quest named the real folk-blues. The distinct feature from the previous game levels is that the enemies have weaknesses and resistance against specific elements and skills. So, the player must have a strategic mind to avoid the attacks and defeat the enemy wisely.
The masked Carnivale guide is the unique single-player part for the Blue Mage setting of the Final Fantasy XIV. This particular stage is an arena-based concept, in which you have to compete against one or multiple enemies at one time. More than a fighting platform, it is more likely, a puzzle in which you first have to problem-solve specific battles. You have a set of Blue Mage skills, weapons, and fighting moves that helps you with the struggle. 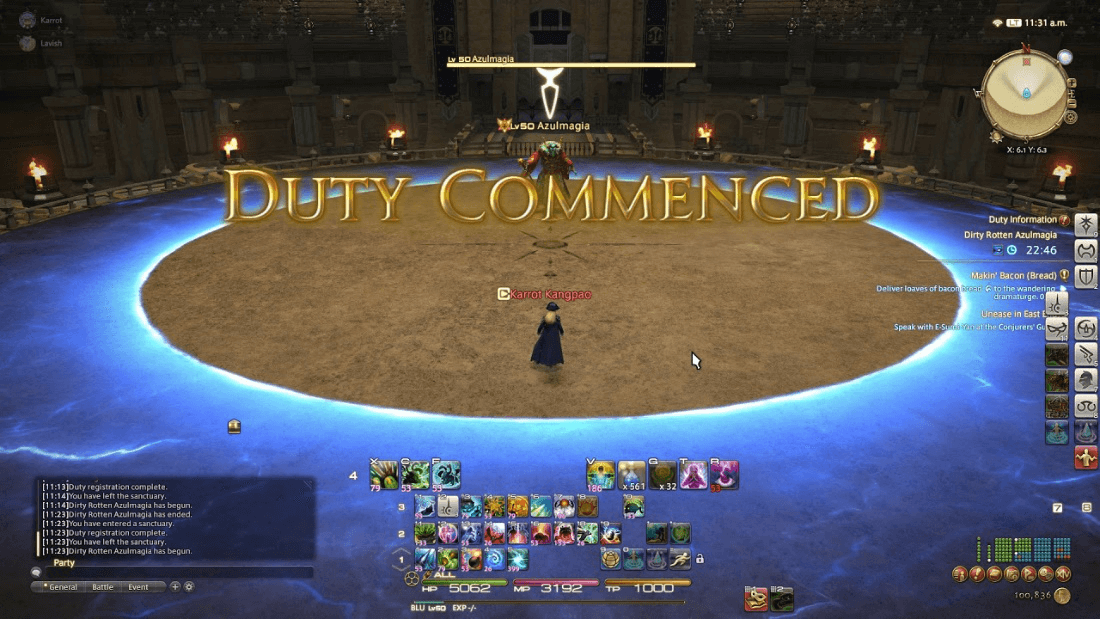 How to Unlock the FFXIV Masked Carnival Stage?

1.Evolving into a Blue Mage
You first have to reach the 50th level in a combat class and finish the center story quest, the ultimate weapon.
These are the primary two requirements that you need to unlock the masked carnival. From there, you will go to the Limsa Lominsa at the lower deck location. An NPC, Zealous, will be at the coordinate of X: 9.9, Y: 11. They will provide you with the initial Blue Mage quest titles as out of the blue. After completing all these steps, you will finally become a Blue Mage.
2.Get to level 50 of Blue Mage.
Now, you have completed the first stage, and you have the requirement to be at level 50 to get into the FFXIV masked carnival.
This much hassle will require you to do some level grinding. Some players prefer to complete the stages individually, while others run with various Blue Mage; it is entirely your choice. You can use different tactics to grind the levels faster, such as bringing your Chocobo out as an assistant while the battle is going on, making you move towards the winning edge.
You must complete every job quest that pop-ups during the levels. It will help you earn more rewards, skills, and FFXIV Gil coins.
3.Achieve the real folk blues quest
When you finally reach level 50, move to the steps of Thal in ul ’dah. You will meet another NPC named Maudlin Latool. He will provide you with the quest of the real folk-blues to unlock the masked carnival.
Once the quest is finished, talk with the celestial attendant. After discussing with them, you have to unlock the masked carnival.

You would be shocked to know that there are few guides available on the internet as compiling a guide may be difficult. Therefore, we jump in to help you understand all the requirements and divide the guide into multiple phases to help you clear the stage quickly.
Requirements
A few things are required to complete the challenge, along with specific spells that you should utilize to reach the end.
Healer Mimicry: It may help you make the fight easier on your MP.
Spells: When completing the quest, the spells you need are the following:
Diamondback
Flying Sardine
Eerie Soundwave
Exuviation

Keep in mind that the boss will come up with Mimic, giving him a buff to make himself unbeatable as well as capable of reflecting any spell you use against him. Therefore, we suggest you take a few steps to prevent yourself from falling into auto-attacking him. This is because one auto-attack on the boss might be fetal if reflected on you.

The next thing you should learn about is the Mimicked Flame Thrower, though it doesn’t contain anything special to know; however, it is a Frontal AoE that may help deal with 5K damage; keep in mind that it is unavoidable.

In the next step, the boss will throw a massive circle toward your feet, and timely dodging the circle may help you sustain your health. Although the first attack would be deadly and need to be dodged quickly, the boss will release two more attacks that can’ be avoided; therefore, you should keep moving continuously to dodge these AoE.

As prior in previous Carnivale Stages, the boss may use Mimicked Imp song that is only avoidable if you use the Flying Sarding to keep the boss silent. Keeping the boss silent may help you prevent yourself from turning into an Imp.

After utilizing the Flame Thrower, the boss may prefer Mimicked Doom Impending as it will place a debuff on your hero that isn’t healable. Doom Debuff becomes useless if your health bar is full. Therefore, we suggest you heal yourself to complete the health before the boss casts the attack.

Next to that, the boss stance to use the Mimic again, and you must be ready to stop yourself attacking him before his cast gets completed.

Using the Mimicked Bushin, the boss calls off a clone amidst the battlefield. The boss and the clone will attack you three times, keeping themselves on the line. This time, you have enough time that you can utilize to dodge and avoid creating any issues.

After making Mimicked Bushin useless, the next thing the boss does is create/place a Critical Strikes buff surrounding him, and you can remove that using the Eerie Soundwave.
Once all is done, the rotation of the previous one appears on the spot in the specific order, such as:
Mimic
Flame Thrower
Mimicked Sap
Mimicked Imp Song
Mimicked doom Imp
Mimic
Mimicked Raw Instinct
After going through all the processes, you can finally quickly kill the boss. Here’s almost everything you should need to know. Now lace up your shoes and embark on a journey to defeat the boss and claim your rewards. Before wrapping up, here are a few bonuses that you can obtain, such as To fast too furious, Slow and Steady, 10 Ways to Die, and more.