WoW
In Classic WoW, there is a Honor System which allows players to climb the ranks and earn PvP rewards at every rank. The ranks are calculated based on players’ weekly PvP contributions. What are the PvP ranks in Classic WoW and what rank is classic PvP gear? Follow this WoW Classic PvP ranks FAQ guide to find basic info about PvP Ranks and how to the rank up in the Honor system.

What are the PvP ranks in Classic WoW?


To rank up in the Honor system, you need to earn enough Contribution points to receive enough Rank Points for the next rank. If you want to get a high rank in the WoW Classic Honor system, you need to delicate much time and energy. For the first two weeks, try to grind out as much Honor as possible. After getting your first week’s ranking, just write down your estimated RP level, Honor amount and your weekly standing. This will help you get a better understanding of your realm's competition.

What rank is classic PvP gear?

You can obtain PvP Honor sets which are sets of PvP gear through the WoW Classic PvP Honor System. There are two different sets of World of Warcraft Classic Honor System: Rare quality set that can be obtained from Ranks 7 to 10, and Epic quality set that can be obtained from levels 12 and 13. Each PvP set also has a different version for both Alliance and Horde characters. The WoW Classic PvP gear can be purchased once a certain rank has been achieved. 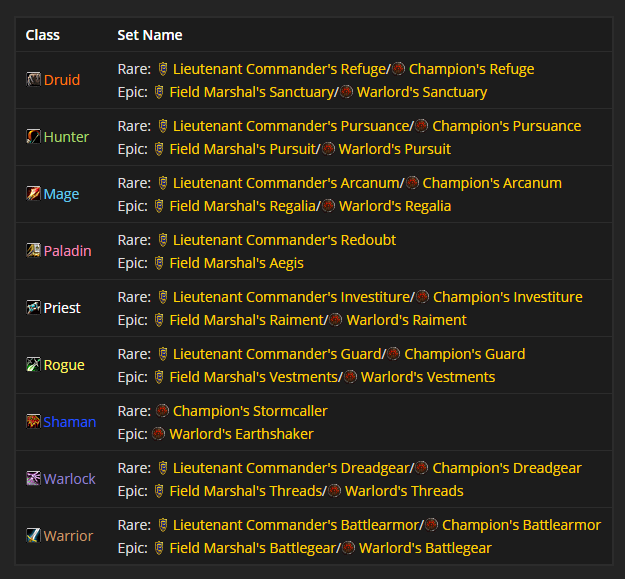 What is the best PvP class in WoW classic?

The Mage and Rogue are the best PvP class in WoW Classic. They are particularly powerful in World PvP, battlegrounds and duels. Each one has the ability to easily deal with multiple targets. The Frost Mage has the best crowd control in the WoW Classic, as well as lots of snares and fierce damage. Both are good, but the rogue is better overall. Rogue is much better overall than Mage, and for the arena, they are almost equal.

Can you skip ranks in WoW Classic PvP?

Yes. To progress from 1-14, it will take about 14 weeks for your faction to receive the highest honor. Levels can be skipped completely, but each successive rank becomes increasingly difficult to clear. Climbing the WoW Classic PvP ranks can be quite difficult. That’s where WoW Classic boosting service comes in. And if you need lots of WoW Classic TBC Gold and other in-game currency, you can also buy it from PVPBank. You’ll receive the gold in minutes and thus get a big advantage in getting a higer PvP rank.